When It Greens, It Pours 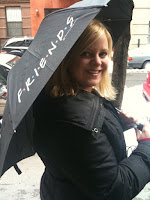 I have to admit that I love a rainy or snowy day outside. It makes me feel all warm and cuddly. I love to bundle up, put my cute rain boots on and most of all, I love to pick out my umbrella for the day.

I have many obsessions...shoes, handbags and umbrellas. My absolute favorite umbrella is my "Friends" umbrella. Yes, the TV show and no, it doesn't have pictures of Chandler and Phoebe on it. Just the simple logo. It is the second best umbrella I ever bought. After almost 6 years, it is still in great condition!

The best umbrella I ever had lasted close to 10 years. It was a Swatch umbrella...red and orange with a clock on it. So adorable.

I remember the day I finally had to part with it. It had turned into a skeleton and it pained me to throw it in the trash. We said our good-byes, I thanked it for its protection from the elements and then carefully placed it into my trash bag.

Most people don't have any sort of attachment to their umbrellas. I know that because of all the umbrellas I see in the corner trash cans on a rainy day.

Just the other day we had a horrible, windy storm and my friend's umbrella broke and she threw it in the trash right in front of Sothebys. I actually wasn't with her when she did it but I certainly heard about it. I wanted to run outside and rescue it from the landfill. Maybe I could've turned it into a piece of art, so it could be inside Sothebys instead of in front of it.

So many of the umbrellas made today are so cheap, they barely make it through a heavy rainstorm. Millions of people buy umbrellas which wind up being thrown away only to head straight to the landfill where it takes an eternity to decompose.

BUT...there is something you can do! Actually, there are many...

1. Buy a well-made, strong umbrella. Sure, it might cost a little more but just think of the long relationship the two of you will have!

2. Buy an umbrella made of recycled materials. There are so many companies like Engage Green that make super cute umbrellas out of old materials. I even own a biodegradeable one made from a company called Brelli!

3. Don't throw it away! Once you've said your good-byes, return it to Recycling Zychal. She is a fabulous designer that turns broken umbrellas into doggie coats, placemats, bibs and a ton of other cool stuff. Here is her address:

4. Turn your used umbrella into a reusable grocery bag! Here are the instructions.

5. Click on this link for some other terrific ideas on what to do with your broken umbrella including using it as a drying rack!
I say let's start an umbrella project! Let's all take that one crappy umbrella and turn it into a work of art. We can sign them, display them and inspire others to think before they chuck.