Gathered together from the cosmic reaches of the universe – here in this great hall of justice - are the most powerful forces of good ever assembled. Their mission – to fight injustice, to right that to which is wrong, and to rid the world of Styrofoam and plastic.

As a kid, Saturdays in my house had two rituals:  cartoons and grocery shopping.

Super Friends was my favorite cartoon, followed by a trip to the great hall of Stop & Shop where I would get my assignment - a handful of coupons from my dad with the mission of gathering these important items.  Off I went, in search of truth, justice and a giant box of Cheerios.

But my assignment was not complete until I’d roll up the back of my father’s foot with the cart and get “the look.”  As a kid, the look was the equivalent of Lex Luthor.

I haven’t received “the look” in quite a few years…until last night.

I don’t hit the produce aisle of the Key Foods very often and yesterday, I realized why.  It was like I had entered the Legion of Doom.  Nearly every piece of produce was lying on a Styrofoam tray and wrapped in plastic. 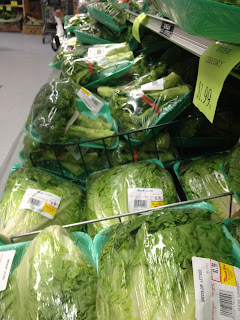 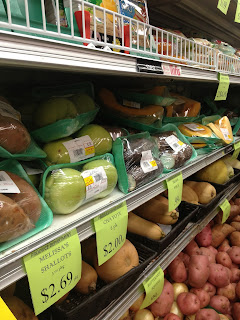 I saw an employee standing there taking some sort of inventory.  Maybe she was counting how much had not been bought since they were pretty well stocked.  Could it at all have anything to do with the packaging?!

I decided to activate my Wonder Twin powers and formed of an activist, asking if there was any way to order the fruits and veggies without all the wrap.  She kindly told me to ask the manager and went back to recording.

I was beginning to realize that we might need to call in the Super Friends to come to our rescue.

I took my cart and was off to interrogate the manager.

Once I found him, I took the truth lasso from my waist, wrapped it around him and demanded to know why these fruits and veggies were wrapped in toxic, land-filling waste.

But all I got back was a blank stare.  Clearly this man was not understanding the magnitude of the arch-villain standing right in front of us.

Finally, he began to utter something…something about new ownership next week.

Will the new manager give a shit?

What else does this current manager know?

Find out next time on Legion of Super Markets.

It's August, and just when you thought it was safe to go back to watching TV... Shark Week was back!
While I fully enjoy watching the feedings of Bulls, Tigers and Great Whites, it’s beyond sad that we even need to have a shark week to raise awareness for these amazing creatures.  In fact, to Jaws’ author Peter Benchley’s chagrin, his book and the movie popularized the false notion that sharks are the enemy.

But we’ll need more than Chief Brody to kill that idea.

In the meantime, swimming up on us is another terror of the sea…trash.

People leaving behind cigarette butts, plastic bags, scraps of food and other unmentionables.  The ones who need to stop acting as the enemy are... us.  For a start, we need to take responsibility for our trash each time we go to the beach.

We've come a long way from 1975, when people were afraid to go to the beach because of "Jaws".  Now, you'll find that a short walk along the coast looking for seashells can turn into a nightmare bigger than a Great White.

At the beach, who even stops to think about trash?  That plastic bag that blew away while you were trying not to get sand in your sandwich?  Or the little plastic rings that stick to the tops of our soda bottles that we just happen to let fall in the sand.  What could those little things matter?  It’s a big beach and a big ocean.  Nothing is going to happen.

But that simply isn’t true.  For every piece of Styrofoam, plastic, butt, and bag you leave behind, our amazing sea creatures are seeing that as food.  Instead of being nourished, they’re dying slow deaths as their stomachs fill with undigestible trash.

Could it be that the shark in Jaws got so big because she was ingesting so much garbage?

Nearly every one of my beach outings uncovers some ridiculous piece of crap that you have to stop and ask yourself “Why?”  This summer was no different.  I uncovered everything from balloons to bubbles to a watermelon.  Yes…a watermelon - sitting on the edge of tide waiting to be washed out to sea. 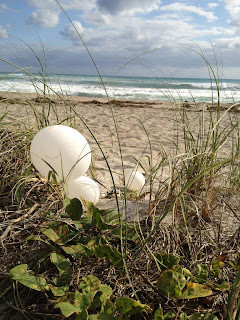 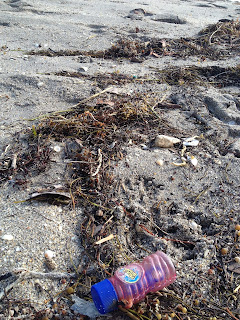 That’s a little more water than that melon had in mind. 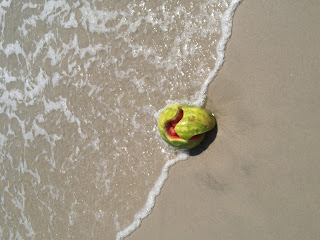 If that imagery isn’t bad enough, imagine you and your family sitting down for that yummy seafood dinner after your great day at the beach.  You bite into that delicious piece of fish… mmmm.  Now stop and think... did that fish ingest any trash?  It probably didn't swallow something the size of Quint, but chances are it's ingested something inedible.  Do you want to be eating little bits of plastic debris?
Included in everyone’s beach bag along with a summer read should be a summer trash bag – one that you carry to not only take your trash away, but any trash that you might pick up between the car and your coveted spot on the beach. 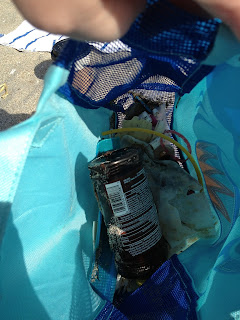 It’s up to all of us to do our part.  To paraphrase Richard Dreyfus in Jaws, we can’t “ignore this problem until it swims up and bites us in the ass.”
Posted by The Green, The Bad and The Ugly at 7:19 AM No comments: