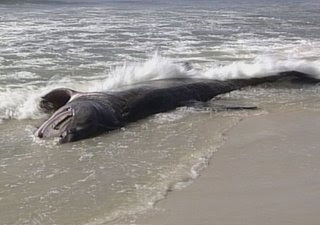 “The great fish moved silently through the night water. The mouth was open just enough to permit a rush of water over the gills. The eyes were sightless in the black. The land seemed almost as dark as the water, for there was no moon. The fish hurtled toward the shore, its jaws open. It landed with a thud, next to crumpled Budweiser cans and stray McDonald’s packaging.”

So might Jaws have begun had it been written last week.

That’s when a 24-foot shark washed up on a Long Island beach. I will be taking a surfing lesson with some friends soon and they began e-mailing me about whether the waters were dangerous to humans because of the shark. I found myself wondering the opposite: were the waters dangerous to sharks because of humans?

This past Sunday, while I was wading in the water, something got caught around my ankle. At first I thought it was seaweed, but it wasn’t. It was a plastic bag. I pulled it off and held it away from me while I looked for a trash can. There weren’t any, so John took it and disposed of it near the restrooms…all the way at the back of the beach.

As I lay in the sun, more trash found its way to me. An empty potato chip bag, a Twinkie wrapper, a juice box…where did these people grow up that it was suddenly OK to leave your trash on the beach?

I asked John to hold the small potato chip bag while I folded our blanket. He stared at me as if I had asked him to hold a stranger’s poopy diaper. At first I was mad. But then I saw his point. We didn’t know whose this was, where it had been. But he held it and then threw it out on our way to the boardwalk.

Then I felt something between my toes. I looked down and saw that I had stepped in gum! Now I was completely grossed out. I hobbled to a cold drinks vendor. He was kind enough to give me napkins and let me dip them into the icy water holding the soda bottles. After much effort, the gum was off my foot, but not my mind.

If all this crap was on our beaches, what was winding up in the ocean?

Which brings me back to the shark. I read that when sharks are sick, they die in the middle of the ocean, they don’t swim toward land, which is apparently what this shark did. I wonder if this great fish ingested too much garbage, like potato chip bags. If that’s true, then that would make me almost as sick as he was.

To Jaws author Peter Benchley’s chagrin, his book and the movie popularized the false notion that sharks are the enemy. But we’ll need more than Chief Brody to kill that idea, and make the oceans safe for everyone. For a start, we need to clean the beaches.
Posted by The Green, The Bad and The Ugly at 9:22 AM 3 comments:

I want to thank the person who commented on my Green Signs post! The web link that you included is amazing!! Stickers that say "These Come From Trees"! I will definitely be buying some of those!!

Thank you again!
Posted by The Green, The Bad and The Ugly at 9:09 AM No comments:

I have recently been getting annoyed at my office's recycling efforts. We have two cans in our kitchen area: one for trash and the other for recycling. Everyday, I look in the trash can and someone has thrown out a bunch of paper. So I stick my hand in, pull it out and throw it in the recycling bin.

This has been going on for months and finally I'd had enough, so I made a sign. A friendly sign that basically said "The trash you throw away ends up in a landfill. You can lesson our impact on the earth by throwing your paper products in the blue can."

I signed my name so there was no mistake as to who was sending the kind reminder. Our office manager loved it and not only posted it right above the trash can, but made copies and placed them around the kitchen area.

Shortly after posting the notice, I walked by the trash can and low and behold, there was a ton of paper in there. Now I was really iritated. Not only was the paper blatently in the trash, but now I had wasted paper on my signs which were obviously doing no good.

Then my sister texted to tell me that she is on her school's green team!! I was ecstatic! She asked for advice and ideas. I instantly went to work finding the best information for her. Why wasn't my office as interested?

As I pondered that question, our environmental services man came in to collect our trash. He asked me to come into the kitchen area and then praised our office for posting the sign! He asked if he could have copies to distribute to the other offices on our floor! He said that at the end of the day, he himself has to separate the trash and it was just not fair. I was thrilled and instantly made the copies.

Today, I did not stick my hand in the landfill can. I walked by several times with a smile on my face!
Posted by The Green, The Bad and The Ugly at 10:29 AM 1 comment: