When You Wish Upon A (Times Square) Ball 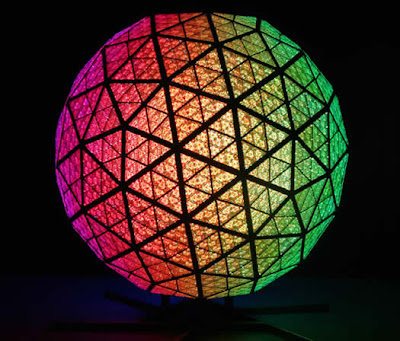 Last night, John did a comedy show in Times Square. The day before New Year's Eve and the area was already a complete zoo. It took us longer to get from the subway to the theater than from our apartment to Times Square.
Thousands of tourists were wandering around, staring at the giant crystal ball, or rather, where the giant crystal ball was going to be placed on top of the lovely Toshiba sign. Although right now the only thing that was dropping was people's resistance to buying those awful plastic hats and other accoutrements which are required for New Year's Eve.
I have actually never taken part in this New York City tradition. At one time I thought it would be a cool idea but as I get older, the idea of being trapped in a space with no bathrooms surrounded by thousands of people has pretty much lost its appeal.
Bathrooms and crowds aside, I was curious to learn just how eco-friendly this ball drop would be.
The Waterford Crystal Ball which weighs in at over 11,000 pounds, is illuminated with over 32,000 Philips LED lights. That was encouraging.
I also found out that Duracell will be illuminating the "2011" numerals with human power for the third year in a row! How is this done you ask? Last year, my good friend Audrey, her daughter Mackenzie and me rode stationary bikes that were set up in Duracell's Power Lab in Times Square. Each push of the pedal captures our energy and converts it into power.
So far, so good! But then . . .
Thanks to Carnival Cruise, there is a big wishing wall in Times Square where thousands of visitors can leave their hopes and dreams for 2011.
On an official piece of 2011 confetti.
And at the stroke of midnight, one TON of these wishes will be dropped on Times Square.
I'm sorry...I just have to catch my breath for a second.
ONE TON?!
That's one ton of paper falling to slushy, post-blizzard streets, clearly unable to be recycled. That's 24 trees that will no longer get to have their branches blow in the wind. All to say Happy New Year! (More like Crappy New Year)
I boycotted the wishing wall and vowed to make my wish on the crystal ball as it hits the "2011" numerals. Eco-friendly and magical.
I leave you with this...
Tonight at midnight
Anticipate with delight!
Forgo the confetti
And have your wish ready
For 2011
Will bring nothing but heaven!
Posted by The Green, The Bad and The Ugly at 12:12 PM 2 comments:

Ornaments On The Tree 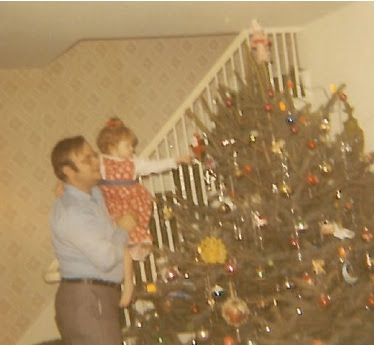 Even as a child, in the not-so-green 1970's, I remember traditions that helped make a Green Christmas.

My mom would bundle up my sister and me and take us for a walk down the block to Mrs. Randall's house. Mrs. Randall was an older woman who had a tree farm. She also was the only person in the neighborhood who would hand out apples on Halloween.

The four of us (mom, dad, Melissa and me) would pick out our tree (which I'm fairly certain wasn't covered with pesticides) and take it home, where my dad would then secure it to the bannister for dear life. (This was the result of my cousins and I running around our living room one December evening and knocking over the tree. Our parents came back from a night on the town to find all of their precious decorations in pieces on the floor.)

My mom would get our ornaments from the attic and my sister and I would run to the box and argue over which ones were ours.

We carefully hung each ornament, reminiscing about where it came from and fighting for prime front-of-the-tree real estate. Early on, my mom and dad made up a rule that was pretty eco-friendly -- only ornaments with meaning could go on the tree.

The ones I remember most clearly were the angels. Mine was green, Melissa's was pink. Although even that was debatable. They were gifts from my grandmother.

We had antique ornaments -- the kind made from glass -- from our neighbors, The Jobin's. They were very delicate and only mom was allowed to hang those up.

As we got older, my parents started a new tradition. Each year, we'd get an ornament representing something from that year. Like the year I went to Ireland with my mom and she got me a lamb. It's a tradition that I continue with my niece and nephew.

Our magnificent tree towered above us, its festive branches protecting us and our gifts while each ornament -- and its memories -- glowed from the lights. We marvelled at our tree every chance we got.

As the years went on, our real tree was replaced by a fake one because of my sister's asthma. Now we know that a fake tree is worse than a real one because of all the BPA's and formaldehyde used to make it.

Now in New York City, my Christmas trees come from city sidewalks. Temporary forests magically appear outside drug stores and Starbucks. This year, John and I went to find one in the arbor outside a local deli. Actually, I had already picked it out. It was this big, round, fat Fraser fir that I had seen on the corner for weeks. It was meant for us. Every time I passed it, it said, "Take me home!" (And "Don't settle for the asking price!")

The salesman saw how much I loved it and gave us a great deal. Like Upper East Side Paul Bunyans (or so we thought), we declined to wrap the tree in plastic (of course) and shlepped our new green friend four blocks to our building, where we carried it up six flights to our apartment. Once inside, we realized we had the perfect tree . . . and the smallest stand.

I went back to the nursery-deli to buy a bigger one. Our salesman looked both ways and told me to take it . . . his boss wasn't there. I thanked him profusely! We now call him Deli Claus.
Every night I lay on my couch and gaze at the ornaments. A penguin in a pink tutu from my dear friend Ruth in Ireland. A glittered sea shell from a trip to Florida to visit my family. A giant Paddington Bear - my most favorite bear of all. And a personal favorite -- a giant sequined ball with a snowman on it, taken when I was living in Washington, DC during a visit to see the National Christmas Tree. Many of the ornaments had fallen and broken and this was one of the ones we salvaged.

These ornaments allow me to remember my mom, dad, sister, good friends and memorable trips that have contributed to our special tree.

And every night I wander over to Mrs. Randall's house in my mind and remember the amazing childhood Christmases that I was blessed with.

I wish you all the greenest of holidays with lots of memories!
Posted by The Green, The Bad and The Ugly at 2:17 PM 1 comment: 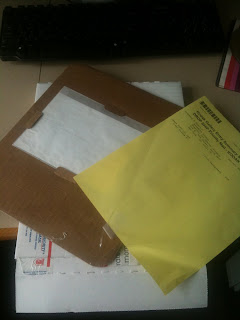 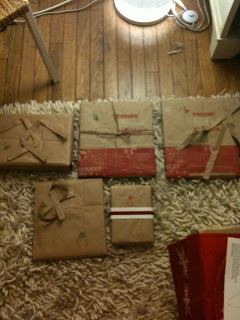 One year, my mom gave me a photo album for Christmas. It's a cardboard album, kind of like a children's board book. It's red with a Christmasy design on the cover and a green satin ribbon that ties it together. Every year I put a picture of John, me and Bailey in it representing that particular year's Christmas.

I love pulling it out and looking through it but this year, I realized I forgot to add 2009's picture.

I went online to the Kodak Gallery where I store many of my pictures that I want to print and found the perfect one. I ordered it immediately.

A couple of days later at work, I was informed that I had a package. I went downstairs to our receiving dock and was handed a good-sized box. 12" x 10" x 1", to be exact.

I hadn't ordered anything so I couldn't figure out what it was. An early Christmas present perhaps?
I got it back to my office and opened it. Inside was a piece of heavy-duty cardboard covered in plastic wrap. I opened it and removed a blank, yellow piece of paper that had been resting against the cardboard. What was behind the piece of paper was appalling.

Behind the piece of paper was my Christmas picture. A 4" x 6" picture, to be exact.

I immediately went to Kodak's website and filed a complaint with their customer service.

After waiting for a response for almost three days, I finally received an email. After a token "we're sorry" and "we'll pass off your complaint to the powers that be," they blamed their packaging on the US Postal Service! They clearly weren't aware that the US Postal Service actually strives for a green footprint!
No, no. They weren't getting off this easy.

I wrote back. This was not acceptable! What were they going to do? They were at risk of losing a customer.

Two weeks went by. No response.

And then...I heard from them.

They further explained how they strive to have your photos arrive safely. Really? I've ordered from other photo websites. Wouldn't a simple cardboard or padded envelope have sufficed?

The next paragraph: "You might consider our level of packaging to be way above standards, when compared to others within the industry. Please note that this is done to assure the overall safety of your placed order."

They ended by "understanding my concerns," forwarding the email to their labs and offering me a $5 coupon on a future order. Don't think I'll be taking them up on that. Can you imagine how five pictures would be packaged? I'd need a cab for the box to get home!

After this atrocity, I started to re-think my shipping methods. Of course Christmas is the time for exchanging presents with loved ones near and far. And I, like many, will be shipping gifts.
So instead of buying boxes, I've been taking boxes from work. Not new ones! Ones that our orders were shipped in...reused.

I'm also cutting down on my wrapping paper supplies. During the holiday season, Americans will throw away approximately 4 million tons of wrapping paper and shopping bags.

This year, think of creative ways to wrap your presents. How about wrapping your gift in a brand new dish towel or a comfy sweater? Or use the funny pages, paper bags from the grocery store or recycled wrapping paper.
Regardless of what you use, make sure to reuse or recycle it and don’t forget to bring along your reusable bag on your holiday shopping spree!

Happy shopping (and shipping)!
Posted by The Green, The Bad and The Ugly at 2:48 PM 1 comment: