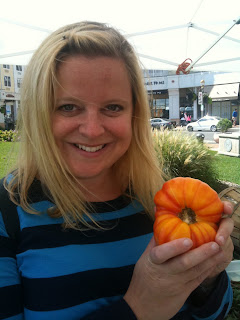 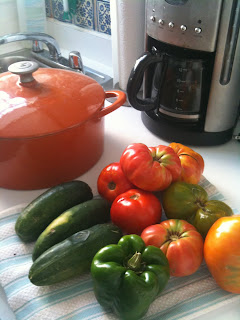 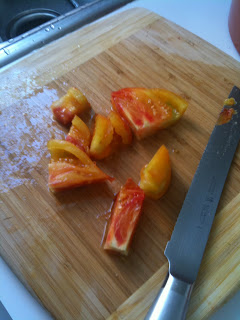 John and I recently went to New Jersey to visit friends and found ourselves in Long Branch at the beach. I love going to the beach off season -- cool sea breezes with that amazing ocean air and not a lot of people around.

We walked the boardwalk with our friends and their baby. I told John if this community weren't a zillion miles away from NYC, I'd beg him to move there.

As we were walking, I spotted a green awning that served as the roof for... a farmers market. Hooray!

We made our way over. It was small, but full of brightly colored fruits and vegetables. Add in the smell of the earth from the veggies and the salt from the sea, I was in sheer heaven.

I wanted to buy everything, but what stood out were the most incredible heirloom tomatoes. Huge, crazy-shaped, edible objects that looked more like art than food.

"Yes!" I shouted back as everyone stared at me.

The first time I ever had gazpacho was at John's parents' house. His mom made this amazing cold soup concotion that had chunks of tomatoes, peppers and cucumbers, fresh from his brother's garden. It was almost like a salad.

I tried to make it once. Mine was turned out more like salsa. I watched John eat it.

I learned early on never try to re-create a recipe that his mom makes perfectly...you won't win.

This year I had found another gazpacho recipe from Mariel Hemingway's cookbook. I'd wanted to try it but was afraid to. This was the perfect opportunity. If it turned out well, then I could claim it as my own. And with these gorgeous tomatoes, I knew this was going to be special.

I pulled out our reusable bag and carefully chose my favorite ones, trying not to go overboard since heirlooms are not only known for their big shapes but their big pricetags.

Heirlooms at the farmers market in our neighborhood are $9 a pound!

I asked the owner the price and braced myself for impact.

Was this possible? Without asking again, John and I immediately began putting more in the bag.

We gathered a few more items like cucumbers and peppers. Cucumbers...three for $1! My itch for wanting to move there got stronger.

We got home and I carefully removed each tomato from the bag and began making the gazpacho.

I took the first tomato and make the cut. The colors inside were even more spectacular than the color outside! Yellow, orange, red!

I couldn't wait to try it. My concoction!

This recipe was chunkier than the last time, yet soupier than John's mother's. The coloring was different, too. Less red and more... brownish red. Or reddish brown. No...it didn't look gross!

Once again, I watched John taste it. My nerves were on edge. He swallowed the first spoonful and I looked for a wrinkled nose or slight smile.

"Oh my God! This is incredible!"

"It's completely different from my mom's."

Uh oh. Was that a bad thing?

Then I tried it. I loved it too! This was definitely a keeper.

Local. Organic. Delicious. What could be better?

For two years I have been writing about my experiences in going green and it's been a lot like the gazpacho.

I've learned that you don't abandon an effort just because one recipe didn't work out or the ingredients didn't blend the way you thought they would. Greening your life -- like gazpacho -- can take some time to get just right. But even gazpacho that isn't quite there is still gazpacho.

Going green is not about perfection. It's about a willingness to try, to make mistakes, and to run the risk that someone might wrinkle their nose or laugh.

Even one small step can make a huge impact.

Thank you so much to all of you who have been with me from the beginning and those of who are just joining me on my journey.

To use one more gazpacho analogy, we're all in this bowl together. 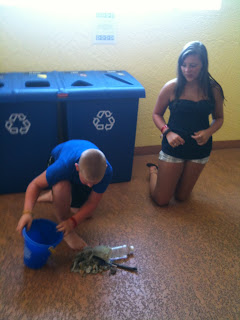 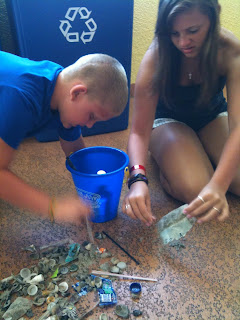 A couple of weeks ago, my sister, niece, nephew and I went to the Ron Jon resort in Cocoa Beach, Florida. It's a great place for families with a big pool, a lazy river and a water slide. But the best part is that it's a only a short distance to the beach.

On that Saturday morning, the kids and I set out to check out the waves and do a little seashell hunting.

We were quickly disappointed when we found very few seashells but plenty of trash.

Straws, bottle caps, plasic bags...all lined up neatly where the foamy water met the dry sand.
I pulled the kids aside and explained how dangerous all of this waste is to the sealife and how the fish can choke on the small pieces of plastic, often mistaking it for food.

Theresa, who is fourteen, had heard my lecture the last time she and I were on the beach a few weeks earlier. Once I started talking, she gave me the classic teenager eye roll and continued down the beach.

Robert, who at eight hasn't had time to hear all of my lectures, listened closely and began to help me pick up trash. Our blue sand pail filled up quickly.

"Is this bad ,Auntie?" he would ask as he held up an unidentifiable piece of plastic.

When Robert found an unopened water bottle, he couldn't believe it.

"Why would someone do that?" he shouted.

I wished I had an answer. I could only hope it fell out of someone's bag and the person didn't notice. I hated to imagine that someone deliberately threw it there.

We walked farther down the beach, picking up trash and the occasional seashell, which was now even more of a treasure. We made a lot of headway and decided it was time to head back.

In the distance, we saw Theresa coming toward us with huge handfuls of seashells. When she got closer, we saw that she, too, was carrying trash.

I was touched that, beyond the eye roll, she had heard me.
And I was so incredibly proud of both of them!

Posted by The Green, The Bad and The Ugly at 1:40 PM No comments: