I'll Have A Turkey and Paper, Hold The Plastic 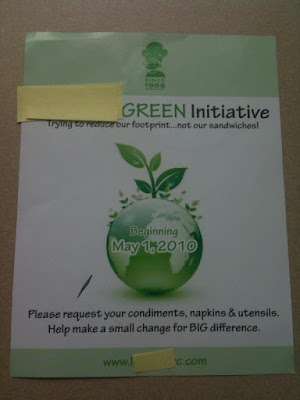 We tend to order out a lot at my work. A favorite is a luncheonette that makes yummy sandwiches and salads.

One day while placing our lunch order online, a bright red paragraph came up on screen letting us know that to help the environment, the take-out deli would no longer provide plastic utensils, condiments or napkins.

I was so excited! Finally! We have an entire drawer full of leftover plastic utensils and a basket as big as a pond overflowing with condiment packets.

We placed our order and waited for our new eco-friendly lunch to arrive.

To top it all off was a stack of napkins. At least there were no utensils.

As I pulled out the last sandwich out of the bag, there was a final slip of paper. A shiny, bright note announcing that to help the environment, they would no longer be providing utensils, napkins and condiments.

Hmmm. Is it really a green initiative if it includes extra paper to repeat the initiative that you just announced on-line?

And does your sandwich really need the tissue-like piece? What is that for? It always gets wet and sticks to the sandwich, anyway.

It's enough to make you want to prepare your own lunch. Which I should be doing anyway.

A few weeks ago, I was looking to find a new facial cleanser. My favorite, Stella McCartney, has been removed from all of the shelves in the US because somehow the organic standards of the EU are worse than the American standards. But that's another blog.

In my journey to find my new cleanser, I travelled to "earth-friendly" stores like Origins and Aveda as well as Sephora to compare products and find one made with the safest ingredients.

After misleading experiences in both Origins and Aveda (both of their products carried at least 2 of the danger list ingredients...see link below), I was off to Sephora.

Upon arrival, a young man came over to me and asked if I wanted help. I explained to him that I was looking for a cleanser that was made with botanical ingredients, minimal chemicals and most importantly, no parabens.

He was very excited about one of the eight brands that are displayed in the "Naturals" section of Sephora.

"All the stars use this one!" he exclaimed holding up a colorful tube.

Well, if the stars use it! I excitedly picked up one of the jars and began to read its contents.

"Oh, you don't have to do that! They are completely free of all the bad stuff."

I trusted him and took home a sample. But something was bothering me. I put the sample aside and went back to the store to do some more research.

I snuck into the store and looked down each aisle carefully so as not to run into him. Finally, I found the product and read the label. It had parabens! I breathed a sigh of relief that I hadn't used the sample.

I decided to check out the other 7 brands against their big wall decorated with pretty green leaves, obviously showing the correlation between nature and these products.

One actually had a list of all the things that supposedly weren't in it on the box, including parabens, yet when I read the label on the jar, it had parabens!

I frantically picked up the other pretty, leafy, flowery patterned jars. Fragrance, parabens, more fragrance! What was going on here?

I pulled a very nice saleswoman to the side and asked her to tell me what Sephora's definition of natural was.

She smiled and said "You are the first person that has asked me that question!"

Really? Was she kidding me?

"Sephora's "natural" products are the ones that contain the least amount of bad things."

Ok. I could accept that. It was unfortunate that only 2 of the 8 products were truly natural. But at least they were trying. And they were honest and up front about it. With me anyway.

But what about all those poor people who want a better product and don't ask what their policy is? Maybe I should stand there with a sign telling them. Hmmm.

Read those labels! Become acquainted with what the nasties are. Know what you're putting on your body, your children's bodies and what's going back into the earth via your drain. Remember that your skin is your largest organ!

Here's a partial list of the most common ingredients to avoid. I pulled this list from a site called Northwestern Health Sciences University but these lists are everywhere...just google them. I liked this one because it had explanations of why these products are bad. And there is a cool app from Gorgeously Green that also has these lists at your disposal.

Good luck and I wish you a very clean and natural shower!

Coal Tar
Function: This chemical helps stop itching, controls eczema, and makes hard, scaly, rough skin soft. It is also used as a colorant in hair dyes.
Product types: shampoos and hair dyes.
Health concerns: International agency government research on cancer says there is enough evidence to suggest that coal tars are carcinogenic in humans. Coal tar has been banned by the European Union since 2004.

Formaldehyde
Function: This chemical acts as a disinfectant, germicide, fungicide, and preservative.
Product Types: deodorants, nail polish, soap, shampoo, and shaving products.
Health Concerns: This is considered a possible human carcinogen, may trigger asthma, irritates eyes and the upper respiratory tract, can damage DNA, and is banned by the European Union.

Phthalates
Function: These are industrial chemicals used as solvents and plasticizers in cosmetics.
Product Types: nail polish, deodorant, fragrance, hair spray, hair gel/mousse, and lotions.
Health Concerns: Phthalates can damage the liver, kidneys, and lungs and acts as a reproductive toxin in males.

Talc
Function: Talc is designed to absorb moisture.
Product Types: blush, powder eye shadow, perfumed powder, baby powder, deodorant, and soap.
Health Concerns: Talc is a proven carcinogen and is linked to ovarian cancer. The chemical has particles similar to asbestos and data suggests that it can cause lung tumors. 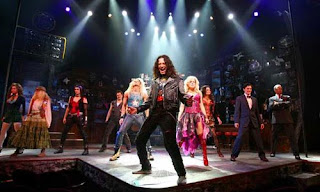 Who says you need electricity to put on an amazing show?

Last week, my father was in town and we went to see Rock of Ages on Broadway. It stars Constantine Maroulis from American Idol. If you grew up in the 80's or are just a fan of 80's music, then this is the show for you. This was definitely a show for me.

The show is a huge spectacle with its share of flashing lights, electric guitars, smoke machines and a mic'd up cast.

My dad bought our tickets and the lady sold him front row. While I was not thrilled at the idea of being exposed, I figured we'd just have a really good view of Constantine. Little did I know that the "front row" was actually 2 seats that were practically on the stage.

The show opened with "Come On Feel The Noise" by Quiet Riot and believe me, we did. The seats shook from the sounds of the instruments and singing.

The first act ended and we laughed about how close we were and how I spent a lot of time looking at, well, lets just say that the cast does a lot of...grinding.

The intermission seemed to be taking longer than usual and then finally the band came out, plugged in and were ready to play. The smoke started but it didn't seem like it was really getting anywhere. And then the news came...

"Ladies and Gentleman, we are experiencing some technical difficulties. We hope to start the show soon."

A lot of groans of disappointment were heard. The band was called off stage. And then one of the stars came out shirtless and looking pretty hot with his six-pack abs.

He apologized for the delay and informed us that there was no power. He started talking with the audience members. My guess is to distract them. After a Q & A, he suddenly decided that he should sing something. He brought one of the guitarists back out and they started jamming. Singing unplugged. And then a couple more cast members came out. And then Constantine. More Q&A and then they got rocking. Soon, the entire cast was out, sitting on the stage, chilling out and singing with just a single, acoustic guitar. No mics. No drums. Just...them.

"We Built This City", "Sister Christian", "The Joker", "Any Way You Want It". It was great. Soon the audience was standing, singing and cheering. This was better than any Broadway show I'd seen in a long time. They ended with "Don't Stop Believin'" when suddenly, the lights popped on.

Another disappointed sigh from the audience. We were having too much fun without the electricity.

They launched into the second act and uttered a few impromptu in-jokes about there being no power during intermission. And by the end of the show, we felt like we had all bonded.

It just goes to show you that while all the lights and mics are great, you can sit through an amazing, electrical show without the electric part.